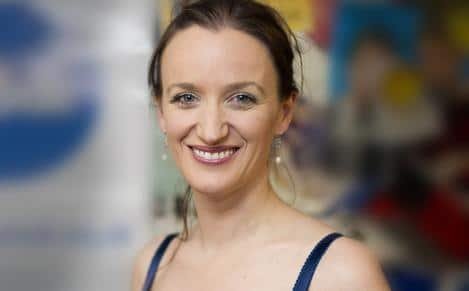 Kate Smurthwaite is a British stand-up comedian, a human-rights activist, political activist.and a feminist. She regularly appears on British television and radio as a pundit, offering opinion and comment on subjects ranging from politics to religion.

Scott Douglas Jacobsen: How did you become an activist, comedian, and feminist?

Well I became a comedian by doing a number of courses on writing and performing and on stand-up and then by getting up and doing it and working on it. Being a feminist and an activist is just how I’ve reacted to the things that I’ve experienced and witnessed and learnt in my life.

Who are comedic heroes for you?

John Oliver and Tina Fey are the performers working right now that make me want to do the sort of things they do. So talented. I also love Mark Steel’s columns and his wonderful “Mark Steel’s in town” radio shows. But in other ways I feel like I carve quite a new and different path. Which is probably why it’s so bloody hard all the time!

Well Last Week Tonight is a masterpiece of political comedy and 30 Rock is the greatest sitcom ever written. And what I love about Mark Steel’s work is how he can make it so political but so personal and connected too.

What is the importance of freedom of speech for more avant garde comedians?

There are comedians in various places around the world doing political material, especially material about organised religion, that puts their life and well being and liberty at risk. Powerful leaders are rightly afraid of comedy because it connects with people and influences them in ways that no amount of angry lecturing can. That’s something we should always bear in mind and work to end. Sadly it feels like in the UK comedians banging on about freedom of speech are mostly unimaginative acts who make racist sexist and homophobic jokes and then call it “censorship” when their third series doesn’t get broadcast. I really think we should arrange some sort of cultural exchange to try to help them understand that their rights extend to not being shot at rather than not being given their own chat show. LOL.

No. They all have sensible jobs.

I learnt a great deal at university. I’m not sure my maths degree gets used much any more. But the experience of being around a lot of interesting people and exposed to a lot of ideas and activities was important.

Did you have early partnerships in these activist and comedic pursuits?

No. In fact rather the opposite; I’m always trying to find partners and teams to work with but I’ve more or less always found the problem is that I end up being the one doing all the work and it falls apart.

That’s not a term I particularly use but I guess I could say I have a tendency to empathise with whoever is being mistreated. I never understand when people say “well we should bomb this country because they’ve done XYZ”, I just think: But the people of that country now have corrupt leadership AND western bombs to contend with. It’s like saying “stop hurting me or I’ll kill your wife”. It only works if you’re such a psychopath you don’t understand that the wife is also human.

Why do you think that adopting a socially progressive outlook is important?

I think human rights matter. I think that’s important. You can call it whatever you like, I don’t care about labels like that. In fact I actively don’t like them, ‘cos they don’t mean anything. As soon as you ascribe to one someone will just say “well John is a social progressive and he wants to eat frogs” and suddenly it’s my job to justify battery frog farms. Then we end up in a six year debate about what the term should mean and who is and who isn’t and all that time there are kids starving.

I’m a feminist and an atheist, I’m in favour of human rights and equality and more protection for the environment. Labels labels labels whatevs yeah?

What is feminism’s importance in the UK in the early 21st century to you?

52% of the U.K. population is women and we tend to take the radical view that we should have the same rights and face the same opportunities as the rest of the population. Right now we’re miles away from that. There’s a yawning pay gap, there’s an average of two women a week being killed by their partner or ex-partner, there’s a rape conviction rate of about 6%. Unless that seems like a fair and equal society, it seems pretty relevant to all of us.

And as for me? Well I live here and I’m a woman so I’m aware of sexism every day. Watching my less experienced male colleagues offered top well paid roles I’m not even considered for. Officials that don’t listen to me. Harassment in and out of work. And then there’s the Internet abuse. The rape and death threats, the words “bitch” and “cunt” appearing within minutes under any new piece of work I produce online. Sexism is what I live in. Of course I want it to stop.

I’m an atheist. The non-existence of God is not a belief, it’s a fact.

What were pivotal moments in becoming an atheist for you?

I stopped going to church at about 14. Prior to that I went to a very happy-clappy baptist church where Sunday School was cringe-worthily trendy. God on a skateboard, graffiti Jesus. I liked it though, they were really nice to me, it was a shame in some ways that I no longer believed it and I couldn’t keep spending time with those people. But somehow it had reached a point where the illogicality of it was too much for me.

Are there inspiring and well-known atheists that you could mention here?

Not long after becoming an atheist I went to college where I heard RIchard Dawkins speak several times. Fast forward twenty years to now and I know Richard and have had the privilege of asking him in more detail about some of the things he talks about, especially evolution, in more detail.

At the moment I’m particularly inspired by women connecting feminism and atheism. Something I think should be obvious and intuitive given the history of misogyny in every major religious tradition. Something I consider myself a part of alongside women who have become my friend like Lisa-Marie Taylor, Maryam Namazie, Rayhana Sultan, Gita Saghal, Joan Smith and probably someone else who will be offended I didn’t mention them!

Atheism is a growing movement. It seems to be a mixture of ‘coming out’ and being convinced by arguments, even disillusionment with traditional religious structures. What is the importance of atheism now?

I think we need to defend and extend the welfare state, I think the elderly, the unemployed, the sick and the disabled deserve proper support. And young people too. I think we should scrap Trident and scrap university tuition fees. I have a lot of other views on policies I think we should introduce that will make life fairer and easier for people in the UK. I also think we should let refugees and migrants into the UK and support them too.

I think everyone should get up and work and campaign for a fairer society. If you want to call that a social movement, sure. I call it being a human being with a sense of compassion. I think the way the press is able to lie and distort the truth is a problem for everyone, not just those who consider themselves part of a particular movement.

I’m currently doing two things. Firstly I’m touring my new solo show Smurthwaite On Masculinity. I’m really proud of it. Tour dates will be up on my website as they’re announced.

Secondly I’m building up a crowdfunded base for my video work to allow me much greater creative freedom. The details for that are here.

What are some of the main themes in the new solo show, Smurthwaite on Masculinity?

Well as the title suggests it’s about masculinity and specifically about the rise of 21st century toxic masculinity. Stag parties, pick-up artists, mob-mentality football crowds, all those things that get justified as “man behaviour” but are often very intimidating and destructive to those around them. It’s a very different show to anything I’ve ever performed in the past but you’ll have to come along and see why!

We talked about freedom of speech and the roles of comedians in society. You mentioned crowdfunding for greater creative freedom. For up-and-coming comedians, what are some important resources for them to be able to develop professionally, test cultural boundaries, and build their own skill sets to express their own creativity?

I’m not sure there are any resources. Comedy is a freelance business so if you want to pay your bills doing it some sort of compromise is going I sneak in eventually. But it’s such a diverse field I could probably give advice to someone looking for a specific sort of club or platform for their work, but the whole industry? It’s tough. Don’t do it unless you’re sure you really want to.

I’d just like more people to see my work. I don’t really care whether that’s on TV or radio or at live shows or on the Internet I just want to continue to build my audience to share my ideas and give people a good laugh in the process.

Thank you for your time, Kate.

Interview with Tara Abhasakun on the Baha’i Faith