Scott Douglas Jacobsen:  First, there’s so much terminology on the Web: secularist, progressive, secular humanist, humanist, Unitarian Universalist humanist, atheist, agnostic, even bright and freethinker. What is the standard, straightforward definition of a humanist?

Humanism is the concept of being and doing good (for yourself and others) without reference to any gods or other supernaturalisms.

What is “humanist” in your sense? Definitions depend on individual.

In my book, Creating Change Through Humanism, I explain that humanism rests on three pillars. First, humanism’s epistemology, or how humanists know things, is the scientific method, relied upon because experience proves it to be the best method for gaining reliable answers to any questions. Second is our compassion for humankind and the world at large. Third is our egalitarianism. Both compassion and egalitarianism arise from our empathy for humanity.

When did this become the worldview for you? The preferable philosophical and ethical take on the world and human beings’ relationship with it. What was the moment or first instance of humanist awakening?

What seems like the main reason for people becoming humanists in America?

With the “nones” as one of the most rapidly growing segments of US society, life without faith or religion is becoming normalised. Humanism provides the answer to those asking, “Now what?”, for humanism is the reality based philosophy that points folks in a direction of progress for ourselves and others.

What is the best reason you have ever come across for humanism, e.g. arguments from logic and philosophy, evidence from mainstream science, or experience within traditional religious structures?

There are so many good arguments for humanism and for discarding religion in favour of other non-theistic approaches. One can start with the problems of religion, such as their disprovable mythologies, contradictory claims, violent histories, corrupt leaders, or simply outdated approaches. Or one can start with humanism itself recognising its firm basis for provable thinking, focus on making life demonstrably better for people, and recognition of our society’s need for better, fairer, ways to live.

You are president of Washington’s DC Atheists, Humanists and Agnostics & the executive director of the American Humanist Association. What tasks and responsibilities come with these distinct positions?

As leader of the local group of 1,500 DC Atheists, Humanists and Agnostics, I have so far helped the group focus on downtown social events like happy hours, dinner meetups, and occasional entertainment events. I intend to expand the group to include more traditional lecture and discussion events in the near future.

As executive director of the American Humanist Association, I spend about a third of my time engaged in writing and coordinating outreach efforts to help increase public awareness of humanism. I spend another third of my time managing staff and working with leadership groups that fall under the AHA umbrella of organisations. The last third is spent more directly outreaching across the country via local group lectures, media appearances, conference talks, and one-on-one meetings with members, political leaders, and allies.

What are some weekly or monthly, and popular, activities provided by Washington, DC Atheists, Humanists and Agnostics?

Our first Wednesday of the month happy hour at James Hoban’s Irish Pub in Dupont Circle is our most consistent and popular event. While folks are united by their rational approach to life’s big questions, it’s populated by who who are diverse in their ages, ethnicities, and backgrounds.

The American Humanist Association, like just about all organisations whose base of supporters were developed primarily through direct mail, has its demographics skewed older, whiter, and male(r). But in recent years as online members/supporters went up over 50,000 and the numbers on Facebook over half a million, the demographics have come closer to the general population. We are planning on a survey for later this year, so that conclusion relies on experience rather than hard numbers, for now. Judging by past surveys about half of humanists are dedicated Democrats, but the other half, instead of being Republican tend to be independents—only 2-3% of our members vote Republican.

What have been the largest activist, educational, and social activities provided by both organisations? What have been honest failures, and successes?

The American Humanist Association has had a string of significant impacts that span the gamut from events like our participation in Reason Rallies, that drew thousands to the National Mall, to our 75th Anniversary Conference last year in Chicago that attracted several hundred members and awarded luminaries like Jared Diamond, John de Lancie, and Medea Benjamin. We’ve had victories on Capitol Hill with the introduction of Darwin Day legislation and the passage of the International Religious Freedom Act and its specific protections for humanists and other non-theists. We continue our remarkable ninety percent win rate on our legal cases that most frequently challenge religious discrimination in public schools. And the numbers keep skyrocketing for those making humanist donations, chatting rationally online, meeting non-theists locally, leading secular invocations, celebrating humanist weddings, and more.

We haven’t always been successful in our efforts, such as when the AHA closed a New York City bioethics office, when we lost our “Under God” case against those words appearing in our Pledge of Allegiance, or when we failed to convince any of the current nontheists in Congress to be completely open about their nontheism, but I see such setbacks as overwhelmed by our successes, which gives us reason to be optimistic for the future.

My sense of the public perception of humanism in the US, and agnosticism and atheism is either not knowing about it or disliking it. What’s behind this?

Among the faithful, there’s a deep-seated fear of those who claim to be good without a god, both because people fear the unknown and also because they feel threatened by a concept that is diametrically opposed to their own faith that all goodness derives from their god.  Just existing, being good without a god, suggests there’s something fatally wrong with the faithful’s faith. Even worldly people ask me how I can be moral without a biblical foundation because they believe that is the only foundation for morality, not realizing the lessons of psychologists like Piaget who explain how nearly everyone develops morality through experience, not ancient books. As more and more atheists and agnostics come out and people get used to their presence, the prejudice will fade.

Who/what are the main threats to humanism as a movement in the US?

Donald Trump and the many Religious Right supported leaders he’s put in place are a dire threat to progress for humanists in the US. Not only are we already seeing efforts to reverse gains toward church-state separation, but the intentions to go further than ever before have been made clear. Among the worst of them is the legislation supported by the Administration that would repeal the Johnson Amendment, which prevents churches and other religious organisations from getting involved in electoral politics. If the repeal went through, it’d be like Citizens United on steroids as all current campaign finance laws become superseded by the change. Most electoral money would be instantly funnelled through the churches where they’d be limitless, anonymous, and tax deductible. The AHA held briefings on the Johnson Amendment issue in both the House and Senate, and we are poised to mobilise numbers to prevent its repeal.

How can people get involved with Washington, DC Atheists, Humanists and Agnostics or the American Humanist Association?

Folks can get involved with the AHA in many ways, perhaps none more impacting than being counted as a member by joining online. People can follow us on Facebook, Twitter, and other social media. Those interested in meeting people face to face can join the DC AHA meetup online, or seek a local group elsewhere in the US. Others my want to use a celebrant for life events or inquire about becoming one themselves. There’s also opportunities for interning/volunteering.

Thank you for your time, Roy.

Thank you for your outreach. 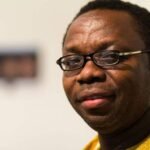 Making Humanism Happen in Nigeria: A labour of Love