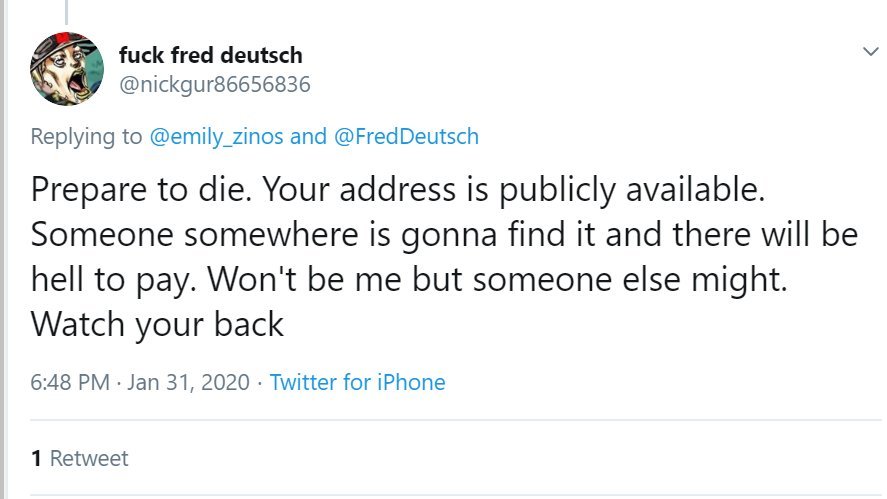 A public threat sent to Emily Zinos for advocating in favour of the bill.
Thursday, February 6, 2020 | Written by Natasha Chart | 1 Comments

The Vulnerable Child Protection Act in South Dakota has been criticised by businesses, but blackmail should not be the basis of medical policy.

When I testified this January, 2020, in favor of the Vulnerable Child Protection Act (VCPA) to a South Dakota House committee, a bill sponsored by Rep. Fred Deutsch and 46 of his colleagues in the State House, the blackmail had started before the hearing was over.

Representatives of three different state business associations — the South Dakota Chamber of Commerce and Industry, the Sioux Falls Chamber of Commerce, and the South Dakota Retail Association — testified that they were worried about the potential economic consequences of passing the VCPA. They also specifically cited concerns about being able to get NCAA events, having large events come to the state, and the national boycott threats against North Carolina over that state’s attempt to preserve single-sex public accommodations.

It’s not clear why endorsing the sterilization of healthy children should be so good for business in the first place, such that companies like Starbucks loudly publicize their support for it, nor why opposing it should be so dire.

The VCPA names no class of person besides minors, 15 and younger, but it bars the use of puberty blockers, cross-sex hormones, or cosmetic genital surgeries, on minors who dislike their bodies based on gender identity claims. While gender dysphoria is a condition recognized by psychiatrists, modern gender identity laws and court cases advanced by organizations like the Human Rights Campaign and the ACLU, or popularized on Twitter by people like ACLU staffer, Chase Strangio, make no reference to any medical or psychiatric condition as a test or qualification for their sweeping demands for gender self-identification.

The medical profession previously tried to use , chemical castration, the removal of sex organs, and cross-sex hormones to treat mental health problems or change unwanted behavior, at the start of the eugenics era. It didn’t work, and careful clinicians had already seen that it didn’t work more than a century ago. In 1976, after decades of sterilization abuses, mainly against girls and women, the federal government banned funding for the sterilization of anyone under 21, or judged mentally incompetent.

As reported by many adults who wish to be permanently sterilized — because they simply don’t wish to have children, or don’t want any more children — doctors in most circumstances will refuse even to consider sterilization for a person without children who is in their 20s.

Now some doctors are back to telling young people that cross-sex hormones are an appropriate psychiatric treatment. Sydney Wright is a young woman who worked with the non-partisan organization Kelsey Coalition to present testimony to legislators in South Dakoka in favor of the VCPA. As she explains, she expected her doctors to be experts in mental health treatment, “[b]ut telling an 18-year-old girl that mega-doses of testosterone would fix her mental health problems? They didn’t even talk to me about other treatment options! No doctor or therapist suggested I give myself time to grow up, or wait and see what happens with counseling sessions – no doctor or therapist told most young people outgrow their feelings of wanting to be the opposite sex. The only advice I got was to take mega-doses of testosterone.”

Increasing numbers of young people are now stepping forward to say that they very much regret the hormonal and surgical gender transitions about which they were once so certain would solve their problems. Yet the media and politicians in the US will barely talk about them because of the aggressive, sometimes criminal, harassment that follows anyone who dissents from the baffling idea that there are human beings who have somehow ended up in the “wrong body.”

Since you can’t be considered alive without a body, saying that one’s body is “wrong” sounds curiously close to making a wrongful-life claim. Is this a belief of the South Dakota Chamber of Commerce, about children in their state, that they’re willing to stake their reputation on?

“Puberty blockers” involve the use of a chemical cocktail on children that slowly, steadily, closes the one and only window for healthy pubertal development that any person ever gets, in some cases putting 14-year-old girls into menopause.  Why is it so good for business to boldly assert that one supports their use, except for the doctors and drug companies directly profiting from it? Why is it good for business, except for the hospitals and clinics getting paid for the procedures, to cut off a healthy girl’s breasts, or flay a healthy boy’s testicles and invert his penis?

Moreover, why should the state leave a door open for doctors to do these things to children based on what seem to be suicide threats? As expected, opponents of the VCPA found a child to come suggest to legislators that they would not have survived a teenage mental health crisis without the drugs under consideration, and parents willing to come in and issue oblique suicide threats on behalf of their children.

Anorexia has the highest mortality rate of any mental disorder, and no mentally healthy person has ever suggested that we treat this all-consuming death wish by mandating that doctors assist patients with further weight loss and starvation. Other patients with mental health conditions that lead to suicidal ideation are not treated by doctors simply doing whatever they want, nor is there any mandate in policy or custom for doctors and parents to agree with them at all times. People who wish to harm themselves often want things that won’t make them any better, and indeed, the data from the public Tavistock and Portman NHS Trust in the UK indicates that girls treated with cross-sex hormones for gender identity disorders reported an increase in self-harm attempts to their doctors.

Why is it so good for business to be led around by people making suicide threats? By definition, someone making a suicide threat has a distorted view of the world, their relationships with others, and the value of human life. We’re going to let people threatening self-harm run the government and economy, now?

These are rhetorical questions, of course.

It’s good for business to support these appalling human rights violations, and to support a mental health protocol that breaks with all ordinary precedent for dealing with people in crisis, because if you don’t, the ACLU will say terrible things about you, and maybe sue you.

The NCAA, an organization that rakes in vast profits on the backs of unpaid young athletes, mostly from low-income families and ethnically marginalized backgrounds, will snub you.

The Human Rights Campaign may take you off their list of good places to work; a list that includes numerous companies with climates of widespread sexual harassment and other worker safety problems. The organization has become a form of cheap public relations representation for corporations, and part of the cover charge for that service is now your support for ending legal recognition of women as a sex class, and endorsing the sterilization of unhappy children who don’t conform to gender stereotypes. You can do what HRC wants, or they will help organize a national boycott against you, as they did to the lesbian organizers of the Michigan Womyn’s Music Festival.

You may be protested, from Seattle to Sioux Falls.

You may be fired, like I was, and as other women I know have been.

You may be insulted in person, or vilified on social media.

You may lose relationships with friends or family who’ve come to believe that sex change is possible and that accurate recognition of sex is “violence.”

You may lose your accounts with Twitter, a company that’s fine with distributing child abuse imagery and discussions, but demands that users pretend to believe that human beings can change sex.

You may lose a blog on sites like WordPress.

You may get threatened online, or offline, including receiving death threats.

No one likes that, of course.

Chase Strangio, the staff attorney with the ACLU, among others, may accuse you of being a murderer, or causing suicides, perhaps before threatening to sue you.

Nevertheless, other lawsuits are coming. These are the suits just now being brought in the UK, alleging that the Tavistock pediatric gender clinic has been irresponsible in transitioning minors. Based on a surge in minor transition, especially among girls, and a slew of whistleblowers questioning the medical ethics of the Tavistock’s practice, the pediatric gender protocols are going to undergo a formal clinical evidence review.

Here, in the US, where whistleblowers, critics, and victims of medical malpractice at the hands of gender clinicians would face sustained monstering at the hands of the entire liberal nonprofit establishment, the Democratic Party, the Chamber of Commerce, the National Association of Manufacturers, social media and online publishing platforms, and even gender-critical leftists who still want to check party affiliation before agreeing with anyone else that there are only two sexes, we haven’t had such whistleblowing or such lawsuits. But they will come.

It took until 2014 for North Carolina’s role in sterilization abuses that ended in the 1970s to catch up with them, including the reported sterilization of one woman who, “wears men’s clothing all [the] time.” It’s unlikely that states will have to wait decades on this account.

Is the Chamber of Commerce going to help with the legal costs when masses of young women who hated their developing bodies and the way they were treated as girls — like one who stood up next to me in a DC library to tell her story last January — become old enough to start asking why they were allowed to cut off their breasts or permanently sterilize themselves as teens? When these young people become old enough to understand how immature they were when they were making these decisions, will Twitter and Facebook, who notoriously crack down on gender-critical speech, be the parties on the hook for recriminations?

It’s the state governments and medical institutions who are going to be presented with this bill. “But Twitter said it was hate speech to say you can’t change sex, and the Chamber of Commerce said that not sterilizing kids is bad for business,” isn’t going to cut it in court, not when the mainstream media finally stops being scared to report on the scale of child medical experimentation that’s going on in the nation’s dozens of pediatric gender clinics. The American Academy of Pediatrics’ 2016 guidelines, which were written by a young gender activist named Gabe Murchison, who is not a doctor, aren’t going to look like a very good defense, either.

The facts are out there. The drug regimens and surgical procedures now being given to and performed on children to prevent and foreclose puberty, or to remove or stunt the development of healthy body parts, have had their risks publicly aired. The responsible parties have been very directly told what’s going on. There’s no plausible deniability.

When future courts ask state governments and medical institutions why they were willing to sterilize so many children who were known to be psychologically troubled, they’re going to have to hope they have a better answer than that they were afraid people would say mean things about them on social media. When the medical associations and doctors are asked why they learned nothing from the sterilization abuses of the past, what will they say for themselves?

Natasha Chart is the Board Chair of Women's Liberation Front 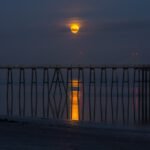 Stitch Up, Bristol Fashion – How Transactivists Prefer Shadows to Limelight 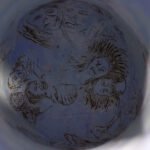