While Africa is rapidly changing and progressing in many ways, Christian and Islamic fundamentalism hold the continent and its people back.

Africa’s religious landscape is changing very rapidly, in various ways. These changes include the introduction of new religions and adjustments in the modes of worship as well as the personalities that are revered. Transformations in Africa’s religious situation also took a dramatic turn – a more global dimension following the advent of Christian and Islamic missionizers. These foreign religious agents have tried to replace and substitute indigenous religious practices with Western and Eastern faiths.

Centuries of proselytisation, which included persistent and unrelenting demonisation and ‘idolization’ of indigenous religions, structural and physical violence against those who revere African gods and spirits have turned the region into a stronghold of Christianity and Islam. These foreign religions have become the dominant faiths, and account for the highest number of adherents, while the indigenous faiths and practices have been consigned to the margins and continue to survive mainly in syncretic forms.

Unfortunately, the spread of Christianity and Islam has not delivered development and civilization as many had hoped. The continent remains the poorest in the world, and life expectancy in Africa is still the lowest of any continent. Unemployment, diseases, hunger, and illiteracy present endemic challenges that seem as if they may never go away, at least for now. So the self-styled civilising mission of these foreign religions has remained a hocus-pocus, a mirage. The civilizing mission has so far been a failed mission, a pretext for further subjugation, domination, exploitation, and dehumanisation of Africans.

The real tragedy is not that foreign religions are growing in Africa or that these faiths have added to the region’s corpus of superstition, dogma, and irrationalism. No, not at all. The real tragedy is that Africans have become the champions and peddlers of these religious orthodoxies at the expense of their dignity and development. Religious extremism has primarily become a self-inflicted wound.

Recent developments in the African religious sectors attest to the dark and destructive effects of these religions on the continent. For instance, in parts of Africa where Christianity is dominant, priests and pastors have used Christian teachings to exploit and manipulate the people. Clerics have sprayed insecticide on members or compelled them to eat grass or to take harmful substances in the course of faith healing or ministrations. Pastors have extorted money from members in the name of tithe and used donations that were made to promote the “work of God” to fund their extravagant lifestyles. Some few African pastors have become so rich to the point that they have purchased private jets and established their private business empires.

Additionally, many pastors are at the forefront of contemporary witchhunts in the region. Charismatic Christian preachers have caused division, hatred, and conflict in families and communities including organising prayer sessions where the attribute diseases, accidents and other forms of misfortune to the occult machinations of family members. Pastors have continued to endanger the environment. They arbitrarily cut down trees, and destroy forest areas including the groves that indigenous religious worshippers use, claiming that these places are the abodes of the evil spirits.

In addition to opposing the recognition of gay rights and same-sex marriage, Christian establishments have frustrated efforts to uphold the reproductive rights of women and any initiatives to make abortion safe and legal. Churches have discouraged the teaching of evolution in schools. And those who question or criticize the positions of the church are often subjected to overt as well as covert persecution and victimization.

But the situation is worse in areas where Islam is the dominant religion. Arab jihadists, traders and scholars introduced Islam to Africa. They used commerce, Quranic education, and violence to promote the religion and to convert Africans by force. As in the case of the 1804 Jihad of Sheikh Uthman Dan Fodio, Muslim jihadists killed Africans who professed other faiths or those who refused to embrace Islam.

In most places where Muslims are in the majority, de facto or de jure sharia law is in force and adherents of other faiths, and non-religious persons are forced to live under sharia law. This religious climate has provided a breeding ground for religious extremism and the emergence of jihadist groups such as Boko Haram in Nigeria, al-Shabab in the east and the Horn of Africa, and their counterparts in Mali, Algeria, and Tunisia. While these militant organisations have targeted and killed Europeans or Americans, most of their victims are Africans.

Boko Haram militants have killed mainly Nigerians including kidnapping schoolgirls. In Northern Nigeria, Christians, as well as Muslims, have lost their lives in recurrent religious bloodletting in the region. Non-Muslims have been beheaded or lynched for blasphemy or for desecrating the Quran, for insulting Allah or out of anger over the cartoon of Prophet Muhammad in Denmark. Muslim minorities have suffered systematic abuse and persecution.

So, the African continent finds itself at a religious crossroads, at a crucial point in history that the indigenous, Christian and Islam religious Africa tyrannise over the lives of people. Religion is holding African emergence, emancipation and enlightenment hostage. The continent is in urgent need of a religious reformation.

Africa needs a campaign to highlight the extremism of Islam and of other religious and cultural establishments in the region. Africans need a movement that openly questions religious teachings, highlights their oppressive tendencies, their humanly degrading treatments and positions. A reformation will help expose religious absurdities that fuel extremisms and the misconceptions that clerics too often use to misinform, mislead and exploit Africans. 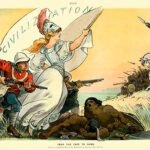 For a New Left – Racism and Imperialism