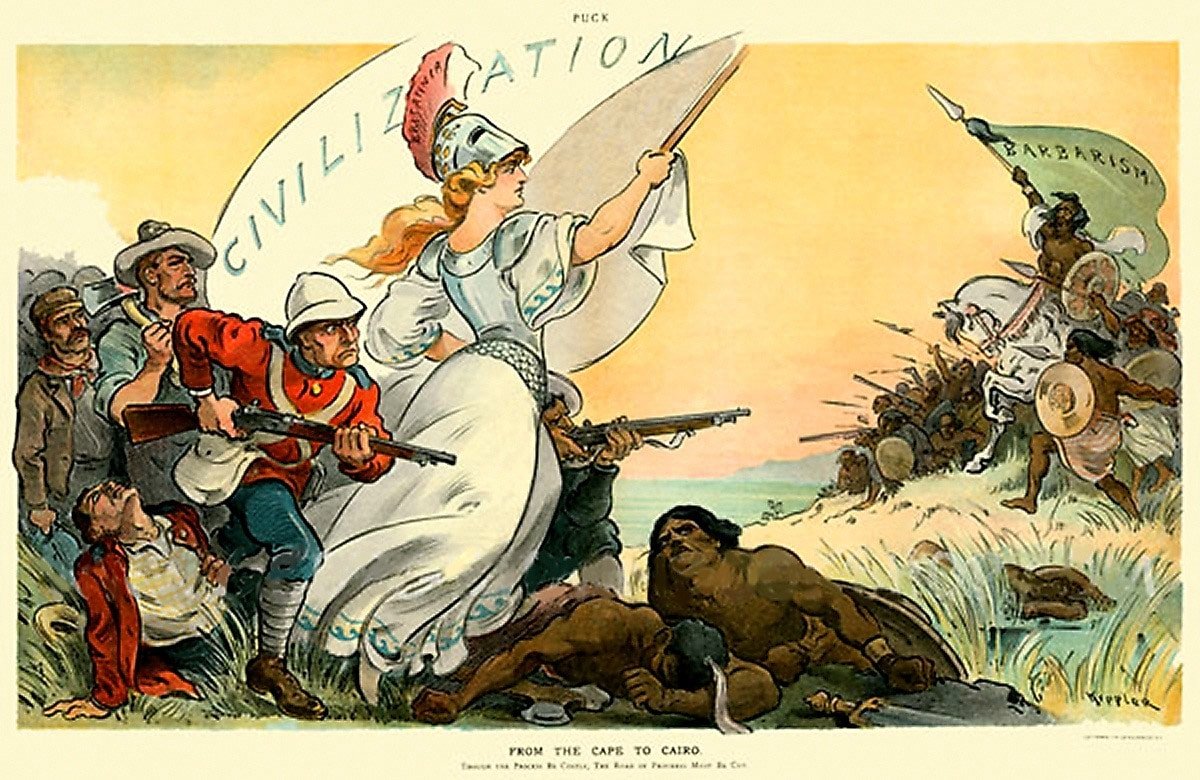 Only a global, united movement can work to deconstruct the institutions of state and corporate power which fuel racism and serve to keep us divided.

The term racism has been increasingly used in such a way as to disguise multiple separate but connected concepts. This has severely hampered the left’s ability to challenge any of these issues.

Using the set of tools and definitions I laid down in a previous article, we can analyse the component parts of what is commonly called racism – making a distinction between ignorance, fear, ideology and institution.

Most people consider imperialism to be the domination of one country over another. This is true enough. But even within a single country, one community of people, defined by ancestry, may hold power over others.

These two groups develop distinct cultures and sometimes even different languages. In order to maintain the distinction between them, marriage and copulation between high status and low status are frowned upon, if not strictly forbidden.

We should be able to see that serfdom, feudalism, aristocracy and slavery are all forms of imperialism. They relied on direct application of force along with the social restrictions on interaction. In many cases, people were literally considered the property of others. Some such imperialism still exists in certain circumstances. In many places, the ‘illegal’ status of undocumented workers is used to exploit them without legal protection or oversight, and sometimes even perfectly legal migrant workers can experience similar circumstances, something which Saudi Arabia is infamous for in particular.

Early modern racism, that is, the division of people into ‘black’ and ‘white’, began as a method of controlling both black and white lower classes. Before such a time, there was little to no legal distinction, and the lower classes mixed together and united in revolt. Therefore it became necessary to make a distinction not just between the aristocracy and the lower classes, but between different groups of the lower classes themselves. This follows the divide and rule method used throughout history to keep subjects in line – pit them against each other to make sure they don’t unite against their rulers. This was a technique used heavily by imperial powers, and its effects endure in many of the ethnic, tribal and religious conflicts we see today. These conflicts largely were not fabricated but rather seized upon and propagated by colonial powers. Perhaps some of the most artificially induced conflicts are the ones which continue over borders established by Western treaties without any understanding or recognition of the population and geography.

“Perhaps some of the most artificially induced conflicts are the ones which continue over borders established by Western treaties without any understanding or recognition of the population and geography.”

We should remember that in many cases, the aristocracy was of different ancestry than the peasants, descending from some ancient group of conquerors, sometimes even speaking another language altogether.

Serfdom, slavery and so on were gradually abolished and overtaken by capitalism, which proved to be more dynamic and resilient by allowing more flow between rich and poor. While fear of slave and peasant revolts was a factor previously, under capitalism both rich and poor alike are theoretically motivated to struggle for position within the system by the threat of potential destitution.

Meanwhile, what we may more easily recognise as imperialism–the conquest and domination of nations–began with the taking of slaves and extracting a tribute, or more direct forms of resource extraction. As the whole world began to organise against this kind of imperialism, capitalism began to fill in the gaps. Western corporations profited from the labour and natural resources of increasingly former colonial countries, while Western governments interfered in these countries politics, for the purposes of maintaining advantageous economic policies for their corporations: propping up dictators when convenient, convincing them to close their borders and open their markets, then supporting rebels and even invading when their popularity falls. Even foreign aid has been used as a tool of imperialism when it props up a government which can’t support its people independently, or comes with conditional economic policies.

“Western corporations profited from the labour and natural resources of increasingly former colonial countries, while Western governments interfered in these countries politics, for the purposes of maintaining advantageous economic policies for their corporations: propping up dictators when convenient, convincing them to close their borders and open their markets, then supporting rebels and even invading when their popularity falls.”

Even though people in the Western world still suffer due to the inequalities under capitalism, they suffer relatively less than those on the receiving end of imperialism. On the backs of international capitalism, Western governments and corporations came to a compromise in which Western workers would be supplied with a welfare state in return for maintaining support for a capitalist economy, and the governments would defend the capitalist system worldwide, and thus maintain imperialism. This is the same approach used under the previous form of imperialism to separate the white slaves from the black slaves.

In fact, the continuance of massive prejudice and discrimination against black people in the USA is most likely a large factor in their failure to produce a socialist movement on the scale of other Western countries. The working classes were divided against each other rather than united against capitalism.

The prejudices which emerge under an imperialist system are commonly referred to as racism. This is incorrect, since racism is an explicit ideology, whereas much of this prejudice is subconscious. These prejudices are directed towards people of who appear suitably different, physically or culturally. Rather than fear or hatred, which will be discussed later, this refers to false ideas and stereotypes born from ignorance.

As discussed in my Metamodernism article, all human beings use models to understand the world. When we rarely, if ever, interact with or learn about people who differ from us in a certain manner, we are inclined to make faulty assumptions about them.

In order to overcome this therefore, we help them to correct their models. Rather than directly convince people, we must let them experience for themselves the shock of having their models discredited. This happens when predictions are made and fail to pan out. This generally has to happen repeatedly before people run out of excuses. That means encouraging naturally positive encounters between the prejudiced and the victims of prejudice.

Xenophobia is born from fear. This fear can arise from simple conflict, but where this is absent, it is largely a product of inequality between distinct racial or cultural groups. The powerful fear is that those who are being exploited may seek to address the imbalance. Those towards the middle bottom end of the economic scale can be incited to blame others lower down, or at least a specific racial or cultural group which is broadly less well off. They are therefore inclined to ascribe all kinds of negative and particularly malevolent characteristics to the objects of their fear and ultimately hatred. In some places with a stark divide, each side might feel constantly under threat of attack from the other. For example, in many places in the USA, the police operate as an occupying force, particularly towards the black population.

“The powerful fear is that those who are being exploited may seek to address the imbalance.”

We must work to address the fears of our communities, whether they are in the minority or majority. This seems similar to the approach for ignorance, but active hostility is far more likely to result in conflict. We must work gently towards reconciliation. Crime, particularly violent crime, is a must to address here, so the poverty and alienation of youth must be countered through finding productive economic activity and building political consciousness. Finding ways to peacefully redress inequality is both a worthy goal in itself and a method to alleviate tension.

The Ideology of Racism

I believe the term racism is most useful when reserved specifically for an ideology which describes a hierarchy between groups of people with different ancestry. This ideology depends on the manufactured concept of ‘race’, which is the idea that all humans can be categorised into a limited set of several ‘races’ that have significant differences.

These can be categorised into ‘benevolent’ racism and ‘malevolent’ racism. These categories must not be interpreted as objective descriptions, but rather they describe the apparent perspective of the racists and thus manifest in different kinds of propaganda.

‘Benevolent’ racism argues that certain breeds of people, ‘races’, are simply lacking the full extent of human capabilities. They are considered stupid, lazy, perhaps even violent. But this is used to argue for a kind of paternalistic shepherding, otherwise known as “the white man’s burden”. It is the duty of ‘superior’ races to reluctantly rule over the other races, so that all may prosper by the arrangement. This ideology relies on the subject races being denied education and opportunity to prove themselves capable, and it supports exploitative institutions. Modern forms of imperialism rely on this kind of ideology, by alleging that other countries require the firm hand of dictators or leadership from westerners, and that economic differences are a product of flawed genetics or sheer laziness. The vast majority of westerners subconsciously buy into this ideology through the belief that they are inherently more deserving of material goods and rights than people from other countries.

The other form of racism is ‘malevolent’ racism. It draws more from fear than ignorance, in that it considers its targets in hostile terms. The lesser races are dirty, smelly, and inclined to all sorts of criminality. They seek to undermine our society and must not be allowed to gain influence. Along with the lack of education and opportunity, this kind of racism flourishes in a climate of fear, violence and national anxiety, often in the wake of some kind of collective insult or embarrassment, as well as economic instability. Rather than supporting exploitation, this kind of ideology is a precursor to suppression, expulsion and finally extermination. Anti-black racism and antisemitism are examples of this kind of racism.

It should be noted that it is possible for the one form of racism to shift into the other,  as the strategic landscape shifts and different groups are perceived as less or more useful. This means that even the patronising ‘benevolent’ forms of racism can shift into brutal violence when circumstances encourage it.

“Even the patronising ‘benevolent’ forms of racism can shift into brutal violence when circumstances encourage it.”

Ideology is more difficult to challenge than mere ignorance or fear because it is organised and rooted in more complex social circumstances, however it too can be washed away with a combination of practical experience and more effective propaganda. Particularly important is the role of community leadership here. Charismatic and compassionate figures must be able to recognise and challenge racist ideology where they find it, as well as serve as leaders for the oppressed to rally around.

As in all of these issues, the institution will be the hardest part to tackle. Only a global, united movement can work to deconstruct the institutions of state and corporate power which serve to keep us divided. No one country can challenge an international system without facing severe repercussions.

Back to the Bad Old Days? Football, Racism and Raheem Sterling

Does Africa Need a Religious Reformation?