The Jewish Leadership Council demanded that Harriet Harman apologise for repeating an antisemitic joke as an example of objectionable humour live on air.

Harriet Harman, Labour Member of Parliament for Camberwell & Peckham, was live on BBC1’s This Week when she repeated an antisemitic joke in what some Jewish groups have described as ‘a staggering error of judgement’.

She made the remarks during a discussion over whether it was ever acceptable to make distasteful jokes. She was describing how she had been accused of being a ‘humourless feminist’ for objecting to certain kinds of jokes.

After Andrew Neil questioned whether she was suggesting that ‘Charlie Chaplain shouldn’t have made jokes about Hitler’, she said,

‘I’ll give you two examples that I protested about because they were offensive and hurtful. So, this was a Guy’s Hospital rag magazine back in the day and people like Andrew say that these things are perfectly all right. Two jokes. One was, “How do you get 100 Jews into a Mini? One in the driver’s seat and 99 in the ashtray”. That’s not funny’.

Andrew Neil cut her off by interjecting, ‘We’ll stop with that one example and we won’t bother with the minute’s silence that you would dare to think what I would think about that, because you have no knowledge of that at all.’

When she attempted to justify herself, he simply told her to ‘be quiet.’

Andrew further elaborated on the incident on Twitter, saying he was ‘appalled and even a little bit upset by what she said.’

He continued: ‘What was wrong was 1) Even to tell that so called joke on live TV. 2) Claim I would like the joke. Appalling on both counts.’

Simon Johnson, the chief executive of the Jewish Leadership Council, commented on the event:

‘I cannot recall being so disappointed in a politician. Harriet Harman must surely know better than to repeat a vile Holocaust joke, irrespective of the point she was trying to make. She must apologise and do so quickly. It is a staggering error of judgement’

Andrew Neil had recently made a speech to a Holocaust Educational Trust dinner, warning attendees of ‘the rise of anti-Semitism on the far left’, ‘more dangerous than the knuckle-dragging right.’

This is one contribution to a long-running conversation over the potential issue of left-wing antisemitism, which Conatus News has covered from several different perspectives. 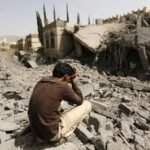