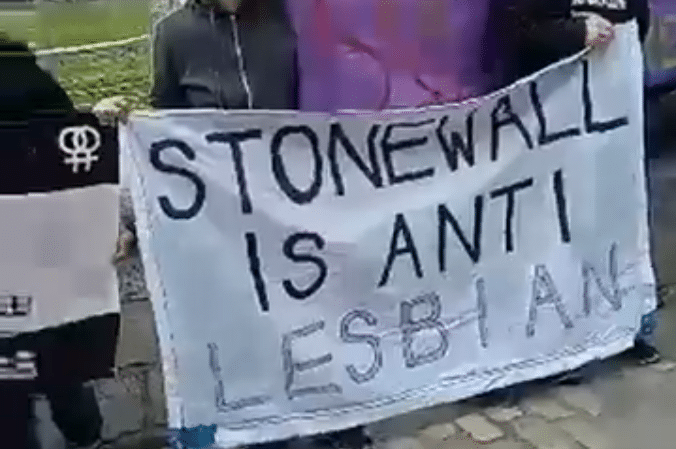 A lively crowd of lesbian campaigners and allies assembled this morning outside the QEII Centre in central Westminster. With colourful, home-made banners the all-women group were protesting a conference organised by Stonewall, the UK’s largest LGBT lobby group. Delegates, who had paid between £269 – £429 per ticket, and staff at the venue explained that they were unaware of any controversy surrounding Stonewall.

The protest, which was planned to coincide with the Lesbian Day of Visibility, was called by groups including the Lesbian Rights Alliance, Object and Storme Sisters.

One of the organisers, Dr Julia Long, explained why the groups had targeted Stonewall:

Lesbians have been betrayed by this well-funded lobby group that is supposed to represent us. Young women who would otherwise grow-up to be healthy, happy lesbians are being duped into identifying as ‘transmen’, binding their breasts, taking off-label hormones and aspiring to double mastectomies. Stonewall call this progress, I call it twenty-first century conversion therapy.

It’s like a sick joke; I think once same sex marriage was granted in order to keep their funding Stonewall jumped on the ‘trans train.’ But by supporting the lie that sex can be changed by uttering the magical statement ‘I identify as,’ Stonewall have effectively erased same-sex attraction. I fought bigots in the past who said as a woman I should have relationships with men, now the very organisation who should fight for my rights is telling me that if a man identifies as a woman, and moreover as a lesbian, I should accept him and his ‘lady penis!’ There is no such thing as a lesbian with a penis!

During the protest, which lasted for two hours, the group gave out graphic leaflets which included images of scarring from transgender surgery and screen captures of offensive tweets allegedly sent by transgender activists.

Stonewall CEO, Ruth Hunt, first announced that the organisation would be inclusive of transgender people in 2015. In the years since, Stonewall have actively championed the rights of transgender people, establishing a ‘Trans Advisory Group’ and campaigning in favour of the government proposal to reform of the Gender Recognition Act in order to streamline the process by which people can change their legal gender.

Last year Stonewall condemned a similar protest at Pride in London organised by the lesbian campaign group ‘Get the L Out’ as transphobic. Stonewall were approached for comment. 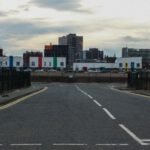 Sold to the Lowest Bidder 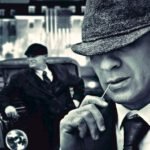 Kiss the Ring: Trump as the Mafia Godfather of the United States