It’s an argument self-proclaimed liberals, Aslan among them, love to trot out – why be concerned about Islamist terrorism if you’re more likely to be killed by furniture or toddlers?
It’s an argument that superficially makes sense  – if one is truly concerned about threats in their order of importance, one should know the numbers.
Since 2001, through the Bush, Obama, and Trump presidencies, the United States has spent close to 2.1 trillion dollars on the ever-expanding and never-ending war on Terror, resulting in the deaths of thousands of Americans and many more people in foreign countries.  Given these enormous costs in lives and treasure, the central argument, as articulated here by Reza Aslan, doesn’t seem so crazy.

“You are, according to the FBI, more likely to die as the result of faulty furniture, than by an Islamic terrorist, so, you should really be scared of your La-Z-Boy”

This is a sentiment recently echoed by Sirius XM host John Fugelsang, pointing out that toddlers kill more people on average than Islamic terrorists do every year:
https://twitter.com/JohnFugelsang/status/909082404039614465
The particular point Fugelsang was making had more to do with gun control than Islamic terrorism per se – and I suspect on the subject of guns there is probably hardly any daylight between my views and his own. But the basic premise that both Aslan and Fugelsang seem to make, either explicitly or implicitly, is that our fears of Islamic terrorism are overblown – according to the numbers, it’s just not a big deal.
This is a point driven home yet again by Huffington Post blogger Omar Alnatour:

“If you are scared of Muslims then you should also be scared of household furniture and toddlers: A study carried out by the University of North Carolina showed that less than 0.0002% of Americans killed since 9/11 were killed by Muslims. (Ironically, this study was done in Chapel Hill: the same place where a Caucasian non-Muslim killed three innocent Muslims as the mainstream media brushed this terrorist attack off as a parking dispute). Based on these numbers, and those of the Consumer Product Safety Commission, the average American is more likely to be crushed to death by their couch or television than they are to be killed by a Muslim. As a matter of fact, Americans were more likely to be killed by a toddler in 2013 than they were by a so-called “Muslim terrorist”.

One need only look similarly at comparisons to the medical maladies that tend to kill Americans in huge numbers like heart disease or cancer to see more reasons to think that this view on the overblown threat of terrorism seems somewhat justified.  Your risk of heart disease is 1 in 7, whereas death by a foreign-born terrorist is 1 in 45,808. 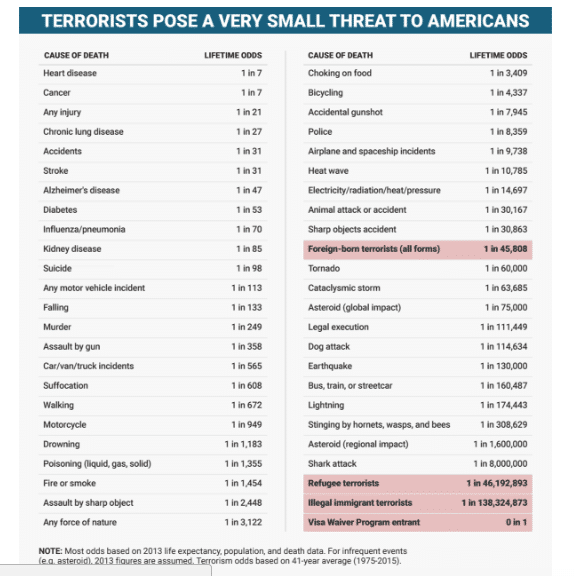 On the face of it, this really isn’t a terrible argument. Why is this such a big deal? We should relax.
There are two big problems with the presentation of this argument – one rooted in dishonesty, and the other in hypocrisy.

1) 9/11 is almost always left out of the statistics

When you start looking at terrorism statistics trying to wade through some of the claims regarding both foreign and domestic terrorists, one of the points of utmost dishonesty practiced by many media outlets is conveniently leaving out the attacks on 9/11 from the statistics.
The headline will read something like “Since 2001, deaths have been…”, and suddenly the threat of Islamist terrorism seems fairly overblown and our concern grossly out of proportion, relative to attacks carried out by domestic right-wing extremists.
Put 9/11 back in, suddenly the threat of Islamist terror attacks dwarfs that of right-wing extremists. 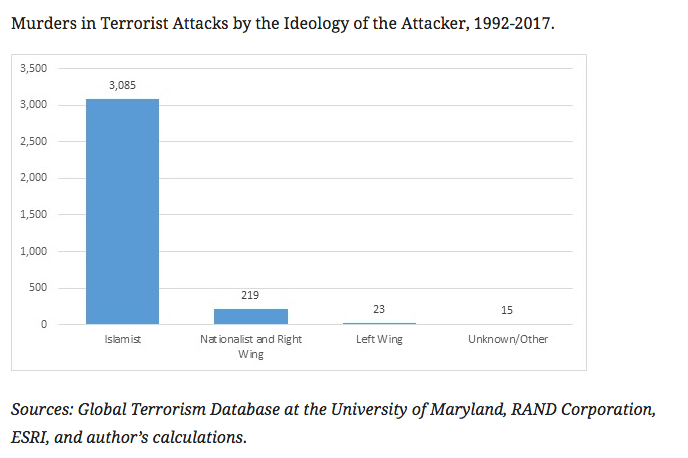 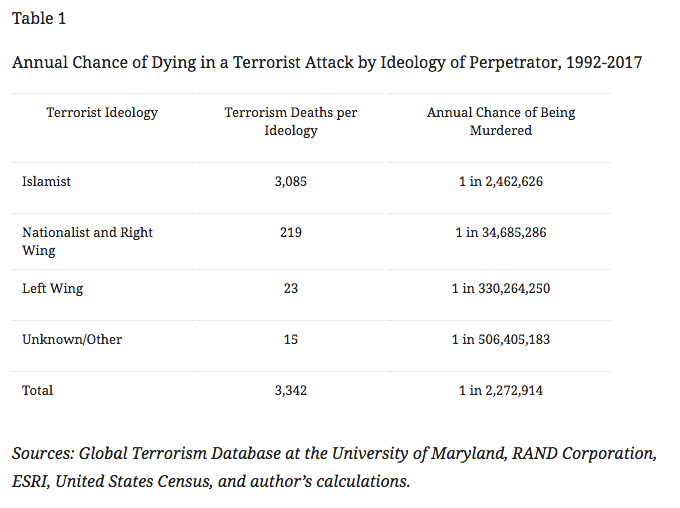 2) Even if you leave 9/11 out, all these threats from furniture and toddlers with guns are more deadly than the other major terror security threat with an ideological root – right-wing extremism, Neo-Nazis and White Nationalists.

With the recent death of Heather Meyer in Charlottesville, and Neo-Nazis marching to protect Confederate monuments, one need not look far to see the rising tide of White nationalism as a threat. And yet based on almost all metrics that Aslan and Fugelsang use to diffuse the fear of Islamic terrorism, White Nationalism similarly comes out, for lack of a better word, overblown.
It appears that both Aslan and Fugelsang contradict themselves in this regard. They seem very concerned about the rise of right-wing extremism – a sentiment I share with them.

In other words, there are no possible statues that could be as beautiful as the statues of white supremacists. DT will greatly miss them. https://t.co/yiZ6EbtY6T

FBI and DHS Warned of Growing Threat From White Supremacists Months Ago https://t.co/kEfNv5WVJo

White nationalist movement growing much faster than Isis on social media https://t.co/WE9NlzoZlO Our ignorant bigots are bigger than theirs!

You heard the Nazi. This is a war. So are we gonna fight back or not? Or should we just keep giving him a chance? https://t.co/BHEKnyPVSB

But he’s not a white nationalist, you guys. https://t.co/AWdSF8J67w

If we leave 9/11 in our calculations, as shown in the chart above, Islamist terrorism is more concerning by an order of magnitude than Right-wing terrorism. If we take the average from 1992 to the present day, the odds of being killed by an Islamist are 1 in 2.4 million vs. 1 in 34 million for right-wing extremists.
And if we leave 9/11 out of more recent calculations, we see the two are actually comparable. Despite the claims of many that there are far more right-wing attacks in the United States, with the Orlando shooting Islamist attacks recently overtook them. 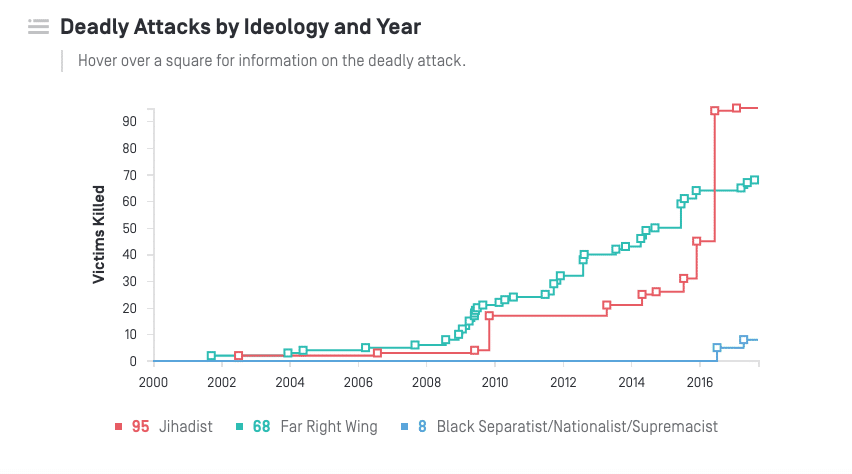 The truth of the terror statistics leads to one of two possible conclusions.
1) If the threat of Islamic terrorism is way overblown, so are our fears of Nazis and White Nationalists, and like regressive critics we should start ridiculing anybody expressing concern over them (“After all, you’re more likely to die from faulty furniture”).
Or
2) If White nationalism, White supremacy, and the terrorism they inspire are real concerns – and they undoubtedly are – then Islamist terrorism is even *more* concerning, and both need to be taken deathly seriously.
That you’re more likely to die from heart attacks or faulty furniture actually isn’t the measuring stick by which you decide to start being concerned. By that logic, we should stop caring so much about White Nationalists and Neo Nazis marching through our streets – an absurd idea that none of us would dare entertain.
Would you tell anyone who feels threatened by the more pronounced presence of White Nationalism that they’re being silly for feeling this way?
“You’re more likely to die from faulty furniture, so stop worrying about White Nationalists” would be an appalling thing to say to the mother of Heather Meyer in the wake of her death in Charlottesville.  The constant incantations of this logic by some leftists in the wake of every new Islamist terror attack is equally fallacious, tone-deaf, and harmful, regardless of its good intentions within the Church of Intersectionality.

UPDATE – This essay was written before the recent shooting in Las Vegas.  Numbers have not yet been adjusted, as the causes/motivations of this killing are not yet clear as to whether or not to include it in terrorism statistics.

Editor-in-Chief of Conatus News. Lucas is also a writer and podcaster, with interests in science, religion and politics. 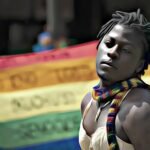 Hate in the Motherland – Homophobia in Africa 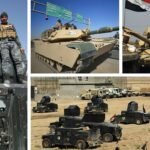