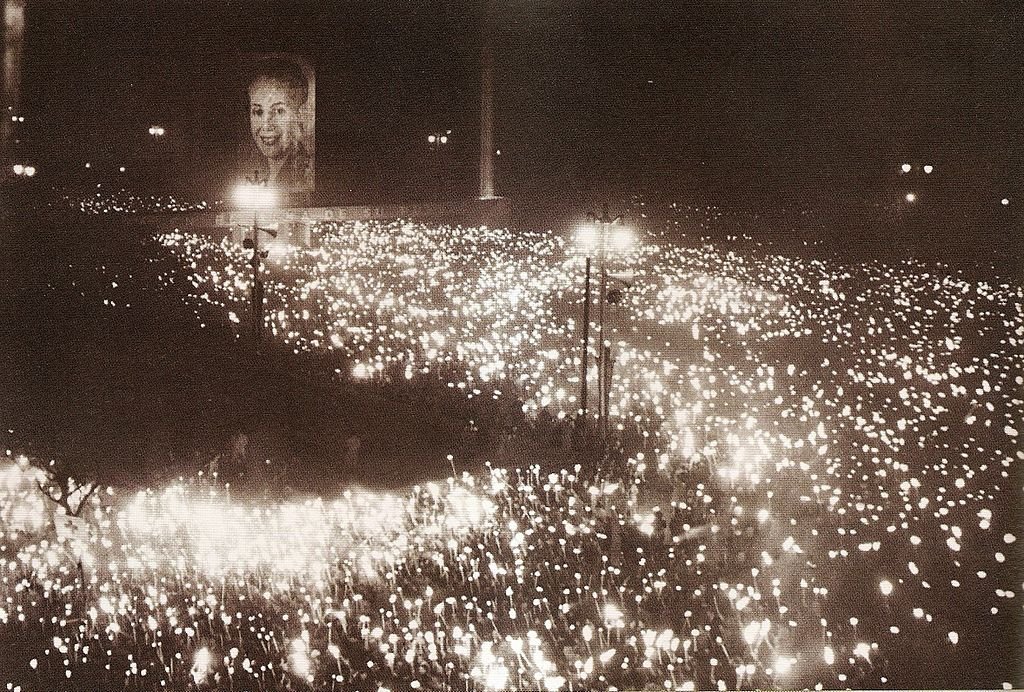 Dan Fisher and Katie Barker examine the internal contradictions within two non-European fascist movements after the Second World War, from Peron to Lebanon.

In a previous article, we explored the question of whether and how much fascism could be said to have left wing influences. We continue this theme today by looking at two examples of conflicts between the left and right wings of movements in post-colonial nations which took direct inspiration from European fascism.

Juan Peron was a corporal in the Argentine army who was sent to study in Europe in 1938. While he was there he studied the governments of Europe and concluded that social democracy could be a viable alternative to the plutocracy of liberal democracy, or the oppression of totalitarianism – and that countries like Fascist Italy and Nazi Germany would transition into these social democracies by bringing the worker and the nation together.

After being involved in a military coup against a dubiously elected conservative government, he gained fame and power by using his position as head of the Department of Labour to pass social reforms and thus cement an alliance with the trade unions. Others within the armed forces grew wary of his influence, and an attempt to arrest him was thwarted by mass demonstrations.

Peron won the elections of 1946, fighting off attacks from both communists on the left and conservatives on the right. He successfully used nationalist rhetoric and condemnation of his opposition’s ties to US interests in the course of his election campaign.

Once in power, he set about keeping Argentina out of the cold war by focusing on economic independence while pushing continual social reforms. Strike activity skyrocketed as his allies in the unions fought employers with the backing of the government. All of this, combined with aggressive nationalisation, saw the Peron government make real progress in boosting workers incomes and providing access to social security.

Internationally he attempted to navigate between the world powers, believing that a third world war was inevitable and wanting to keep Argentina out of it. This was made difficult at first by US hostility and suspicion, given the Argentine government’s social reforms and moves towards economic self-reliance, but tensions were broadly smoothed over. The impact of US sanctions would however go on to cause difficulties for the Argentine economy.

The price of this social progress would be the repression and torture of Peron’s opponents. The universities were a hotbed of anti-Peronist activity, given their largely upper-middle-class composition, and the Peron regime was hostile to academics and artists. Hundreds of people would be imprisoned and tortured by Peronist police forces.

Furthermore, Argentina would become a refuge for Nazis and other Fascists fleeing from prosecution after the War ended in Europe. Peron actively participated in helping such emigration come about. It has been alleged that he did so in order to obtain Nazi technology – but this does not explain his aiding of other kinds of fascist, in particular the notorious Croatian Ustaše. Peron condemned the Nuremberg trials, calling them a disgrace and suggesting that the Allies did not deserve to win the war.

For his second presidential campaign, Peron would found the ‘Justicialist Party’ as a fusion of ‘justice’ and ‘socialist’. Peron’s second term saw, partly due to the efforts of his popular first wife, Evita, the extension of suffrage to women as well as the legalisation of divorce, but also of prostitution. This would turn the Catholic Church entirely against him and seed the beginnings of instability following an attempted coup and Peronist retaliation. Several years later a coup would eventually succeed and Peron would go into exile, settling in Francoist Spain.

During his exile Peron would court both far left and far right groups in Argentina and internationally – arranging secret meetings with figures such as Salvador Allende and Che Guevara. The latter of whom he advised against attempting his ultimately fatal guerilla warfare in Bolivia, and instead promised him Peronist support should he return to Argentina.

When the military regime finally folded to popular demands for free elections, the left-wing Peronist candidate Dr. Héctor Cámpora won, and Peron himself was flown back to Argentina. However, as several million people rallied to the airport he was due to land at, right-wing Peronists opened fire on their left-wing rivals, in an event which would go on to be remembered as the Ezeiza massacre.

This would set the stage for much of Peron’s third term in government. Increasing violence between left and right factions of Peronism, with terrorist attacks and assassinations by both sides. One of Peron’s ministers would divert government funds to set up the Argentine Anticommunist Alliance, or ‘Triple A’. This brutal fascist death squad would target not just communists but moderates as well, being found guilty of crimes against humanity in 2006. With Peron’s death and the assumption of power by his third wife Isabel, the ‘dirty war’ escalated until eventually another military coup would do away with the last traces of Peronism, while continuing with Isabel’s neoliberal economic policies and brutal political repression.

After the military government’s humiliating defeat at the hands of the British during the Falklands war, elections would return to Argentina and the Justicialist Party would find a place as a centre-right force, eventually shifting back to the left from 2003 under Nestor Kirchener.

Lebanon – The Phalange vs The Syrian Social Nationalist Party

The Syrian Socialist National Party operates across Lebanon, Syria, Jordan, Iraq and Palestine. It advocates for a Syrian nation state encompassing the ‘fertile crescent’. Formed in 1932, it was accused of having links with both Italian fascism and German Nazism in the 1930s, although these links were denied by all parties. Whilst it’s founder Antun Saadeeh spent time in Argentina as Lebanon was under French colonial rule, the Argentinian branch of the SSNP did use its newspaper to voice open support for the Nazis. Saadeeh denounced this, however, arguing that the SSNP should remain neutral during the war. Even in its early days, the SSNP clashed with other parties agitating for the removal of the French, particularly the Lebanese Phalange Party, also known as the Kataeb, who were inspired by the Spanish Falange.

The Lebanese Phalange formed in 1936 as a Maronite paramilitary youth organization by Pierre Gemayel who came back from the Berlin Olympics inspired by the discipline in the fascist organisations he had seen. The movement’s uniforms originally included brown shirts and members gave the Roman salute. Whilst the Lebanese Phalange also opposed French rule in Lebanon, they disagreed with the SSNP about how Lebanon should be ruled after the French exit in 1943. The SSNP argued that borders in the Middle East were arbitrary and a result of colonial rule, believing that the Greater Syrian nation state should cover Mesopotamia and the fertile crescent, whilst the Lebanese Phalange supported an independent Lebanese state within the borders of the old French colony.

The SSNP agitated for a production-based economy, a socialist-inspired policy. They railed against the traditional class structure in Lebanon which included feudal lords and wanted to free the working class from the bonds of religion and sectarianism. After the establishment of the state of Israel, which the SSNP had fought against, the SSNP attempted to seize power in 1949. This was partly a response to the Palestinian exodus, and partly to the aggressive stance of the Phalange-backed Lebanese government. The attempted revolution failed and Saadeh was executed after an extremely short and secretive trial.

A second seizure of power was attempted in 1961 when two SSNP army officers tried to carry out a lightning coup against Fouad Chehab and failed.  Whilst the reason given by the perpetrators was the dictatorial rule of General Chehab, the SSNP was also concerned that the desire for a Greater Syria was being subsumed by Arab Nationalism in general, and Chehab’s support for Nasserist Arab Nationalism was a contributory factor.

The Lebanese Civil War saw the SSNP and the Lebanese Phalange pitted against each other. The SSNP formed a military squad and allied itself with the leftists against the Phalangists and the Lebanese Front. The two fascist-inspired political movements thus found themselves on opposite sides of the civil war. For the SSNP, the Lebanese Civil War was an inevitable conflict – the result of dividing the true Syrian nation into small arbitrary states. For the Phalangists, they saw the increasing numbers of Palestinian refugees as a threat to their influence and power.
The Phalangists went on to form the right-wing Lebanese Forces militia which would play a dominant role in the Civil War. The death of Pierre Gemayel in 1984 led to a weakening of control over the Lebanese Army, which become virtually independent as Muslim recruits deserted and rebelled against the mostly Christian officer ranks. The Phalange party entered a period of decline and was only a minor player in the rest of the Lebanese Civil War.

After the Israeli occupation and defeat of the leftists in the 1982 Lebanon War, the SSNP again sided with leftist organisations in a bid to resist the Israeli occupation. The FBI blamed the SSNP for the assassination of the Phalangist President, Bachir Gemayel, after just a month in power. In 1983 the party joined the Lebanese National Salvation Front and began detonating bombs and using suicide bombers.

In Syria, the Syrian Social Nationalist Party would long remain repressed by Arab Socialist Baath Party, given their conflicting views on Syrian vs Arab nationalism. However, in 2005 they would be legalised and brought into the Baathist ruling coalition, and their paramilitary wing would see action fighting for the regime in the Syrian Civil War.

While European fascism was always a method of re-establishing an order threatened by democracy and communism, it was not uncommon for people in colonial nations to see it as a method of providing their country with a newly reforged national identity and the strength to resist the colonial powers. This often gave fascist movements outside of Europe a distinctly more left-wing slant.

It is clear to us now that, far from providing unity, fascist movements in the post-colonial world only served to prolong social conflict. Rather than reconciling workers and bosses to a kinder, gentler economic system, those on the left and right simply fought over the control and direction of the movement.

Instead of ushering in social democracy through heavy handed, authoritarian measures and political repression, Juan Peron fed the conflict between far-right and far-left elements within his country until it cracked at the seams.

The failure of the fascist project can perhaps have no better example than the history of conflict between the Phalange and the SSNP. Rather than uniting humanity with a shared vision of progress, fascism seeks to unite a particular group over a common cause of claiming and defending specific territories. But even fascist groups within a single country cannot agree on what their ‘nation’ looks or should look like, and rather than resolving the class conflict through patriotism and corporatism, find themselves pulled to the left or the right as circumstances dictate. 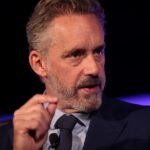 Jordan Peterson and the Apocalypse of Modernism