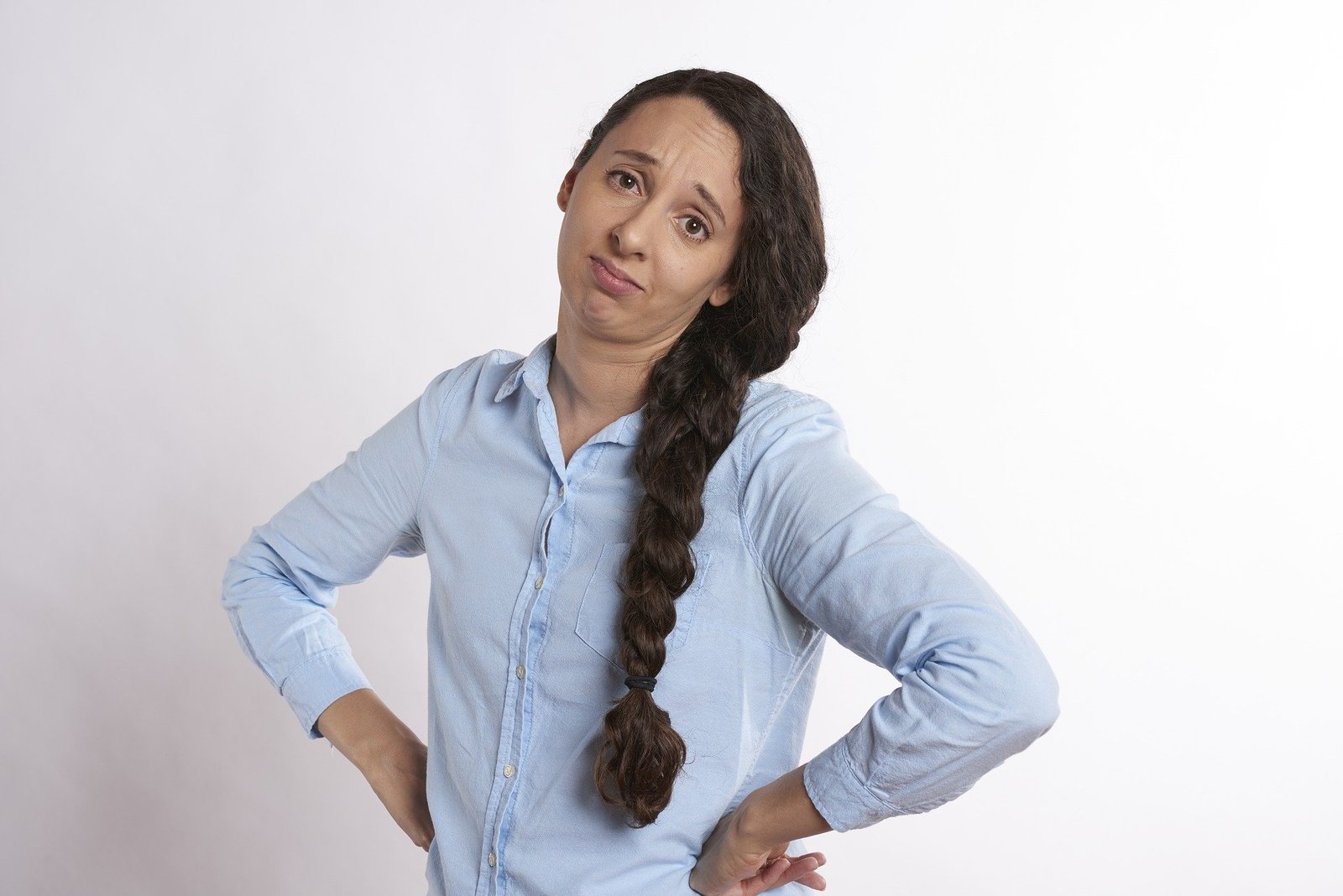 ‘Negging’ is when predatory men insult women to lower their self-esteem in order to manipulate them. Has this been happening on the scale of a movement?

Everything and everyone at some point is transphobic, not inclusionary enough. Women who understand that women as a class face sex-based discrimination are called ‘Trans Exclusionary Radical Feminists’ and the acronym is treated as a heinous mark by the woke. Similarly, those who know that lesbians don’t have penises, or that same-sex attraction is real are branded ‘TERF’.

At first, I thought it was just a way for men and impressionable women who centre men to attack feminists out in the open. Criticised for language such as ‘bitch’, ‘witch’, ‘femanazi’ they had now found a progressive insult and means to dismiss feminists. A new way to guilt trip and bully younger females who try to centre themselves rather than males. They had such a lark with TERF that its remit had expanded and now included those that defended same-sex attraction. It has re-branded homophobia as progressive. But, is something more sinister occurring?

The manipulation strategy of ‘negging’ was brought to infamy by ‘pick up artists’ (PUAs) who emerged in MRA and incel corners of the internet. PUA’s share with their MRA and incel brethren the idea of women as objects for men’s sexual pleasure. Negging has been attributed to infamous PUA Erik von Markovik (also known by his stage name Mystery), who starred in VH1 series The Pickup Artist.[efn_note]J. Lindsay, ‘What is Negging?’, Metro (22 March, 2018) https://metro.co.uk/2018/03/22/what-is-negging-7407664/[/efn_note] The most famous PUA is Roosh V who wanted the legalisation of rape and promoted negging as one of his “pump and dump” strategies in his various sex travel guides.[efn_note]C. Wong Katzman & A. Washko, ‘From Message Board to Crowded Bar Inside Angela Washko’s The Game: The Game’, The Nation (30 October, 2019), https://www.thenation.com/article/culture/the-game-video-game-essay/

CW – this is a MRA website: J. Powell, ‘Roosh V has Reduced Women to Sexual Commodities’, Secular Patriarchy, (15 February, 2016), https://secularpatriarchy.wordpress.com/2016/02/15/roosh-v-has-reduced-women-to-sexual-commodities/comment-page-1/[/efn_note] PUAs are focused on coercing women into sex, but what if these techniques had been applied outside of a desire for sex and more broadly to a co-ordinated attack on feminism and women’s rights? From individual women’s bodies to women’s movements and spaces?

It is understandable that methodologies such as negging would move between different sections of the online misogynistic community known as the ‘manosphere’ as the members – incel, MRA, TRA – move between groups themselves. The boundaries are porous. I researched the cross-over between the MRA, incel and trans communities online for Object! and found that there was a large intersect.[efn_note]Dr Em for Object!, ‘Manosphere’, Twitter (11 April 2018), https://threadreaderapp.com/thread/984157067735961600.html[/efn_note]

The manosphere has been grabbing media attention as ‘The sexist world has become a recruiting ground for potential mass shooters’, ‘We need to talk about the online radicalisation of young, white men’ and supposedly the manosphere communities are becoming more toxic, showing nihilistic and extreme anti-women ideologies according to recent studies.[efn_note]

A. Wilkinson, ‘We need to talk about the online radicalisation of young, white men’, The Guardian (15 November 2016), https://www.theguardian.com/commentisfree/2016/nov/15/alt-right-manosphere-mainstream-politics-breitbart

Negging is using a negative comment to initiate contact and force a woman to prove it is untrue, it belittles a woman’s confidence and makes women desire the accuser’s approval. This permits a way in for the manipulator and silences that gut feeling that something is not right. Described by Gavin De Becker as ‘typecasting’ the negative label compels a challenge, he used the real occasion of a rapist alleging a woman was too proud to accept assistance to gain access to her car.[efn_note]G. De Becker, The Gift of Fear: Survival Signals that Protect Us from Violence (London, Bloomsbury, 1997), pp. 59 – 60.[/efn_note]The woman’s desire to be liked by the man and not thought ‘proud’ prevented her from asking the natural safety questions in her mind – who is he, why is he here, do I feel comfortable? Another example is when an unknown man says to a woman in a bar ‘you are so snooty you would never talk to a man like me’ the woman responds by talking to the man to prove the allegation false. She now without realising it wants his approval and he has achieved his ends of engaging her in conversation. The criticism does not have to be accurate, it does not even need to make sense, it just has to obtain the projected outcome. It doesn’t have the desired result on every woman, what we must always acknowledge about predatory behaviour is that the manipulator will whittle down his victims, he will try it on fifty women but only needs to succeed with one. The same dynamic is at play when groomers target older children and teens – ‘take your top off, are you a prude?’ or ‘drink this, or are you boring?’. So, what does negging, or typecasting, look like when applied to a movement?

It looks like accusations of transphobia and exclusion. The desired effect is to get women to include males who identify as females based on sexist stereotypes inside the feminist movement or women’s parties. To refute allegations of transphobia women include trans identified males. Voila. Once inside these males can change the focus to men’s issues rather than women’s, police language through feigned offence and demand a compromise. Males can engage in forced teaming of the women’s movement and trash it from the inside.[efn_note]Dr Em, ‘Forced Teaming, Feminism, LGB and ‘Trans Rights’, Uncommon Ground Media (25 May 2020), https://uncommongroundmedia.com/forced-teaming-feminism-lgb-and-trans-rights[/efn_note] They can undermine feminist arguments and analysis with exceptionalism – sometimes men are women, or sometimes we will pretend they are. The same is true for LGB movements. An incredibly homophobic ideology enters groups set up to support the LGB and slowly these groups start denying that same-sex attraction is real. Like negging on an individual level, it doesn’t work on all women’s groups and LGB groups or political parties, this is why there is a sense of all women’s and LGB resources being targeted. A relentless demand for inclusion of males, denial of biological sex and same-sex attraction and accusations of transphobia. Individual trans identified males don’t have to participate in negging themselves but they profit from others negging, they use it as a reason to be there in the women’s and LGB groups. The need for acceptance is powerful, particularly among women as we have been socially conditioned to be pleasing – ‘just be nice!’. We have been socially groomed to want men to like us, a woman’s worth is still how a man values her. All men, no matter what they are wearing, profit from this, they don’t have to ‘neg’ as our culture does that day-in and day-out to women and girls.

The ‘no debate’ mantra of trans activists has negged the women’s movement into a situation where feminists are now debating the definition of woman and our rights. In order to prove that we are reasonable and they are not feminism has begun to discuss compromising on women’s rights.  No. I do not want to debate whether women are fully human, fully deserving of the human rights to privacy, dignity, freedom of expression and thought. No. I don’t want to debate if sometimes men can be women on the basis of sexist stereotypes, or if sometimes children are born wrong because they don’t conform to an oppressive system. No. I will not consider the situations in which it is okay to pretend that males can change sex if they want to and should be included as women. No. Males do not get to define female, women deserve the right to self-definition. Humans can not change sex. There are two sexes. 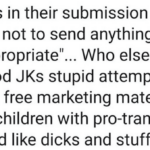 “J.K. Rowling Is Unsafe Around Kids: Send Penises To A Children’s Drawing Competition!” 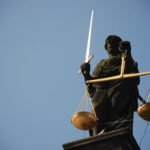